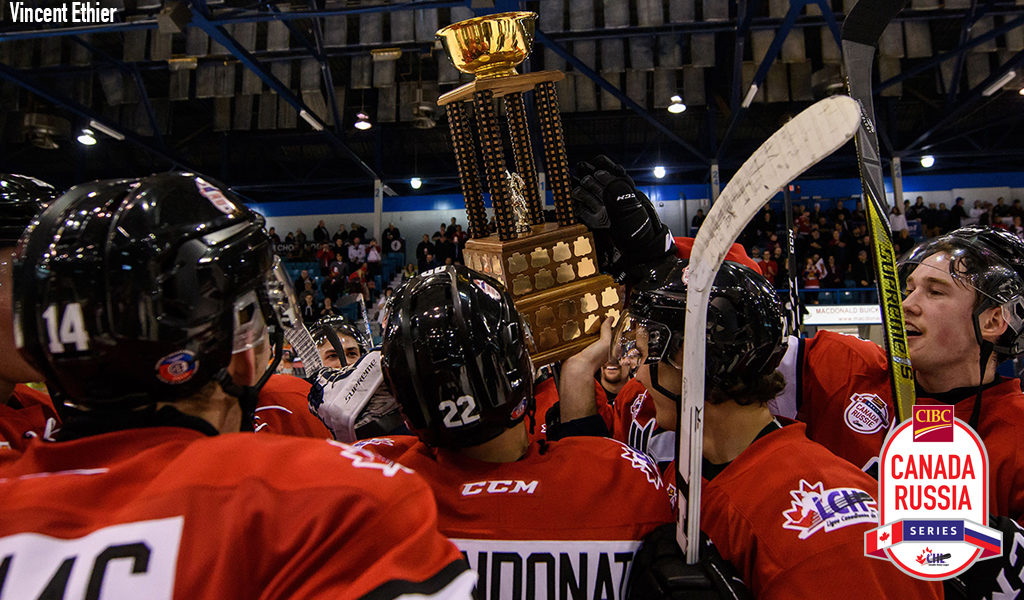 The 15th edition of the CIBC Canada Russia Series was one of the most intense yet as Russia, beaten badly in Game 1 of the series, battled back to win Game 6 and tie the series 9-9 in points.

The CHL earns a third consecutive series victory for the first time since 2009, winning for the 12th time in the event’s 15-year history.

Team Russia’s Alexey Polodyan led the event in scoring, coming one point shy of tying a Russian event record with six points (3-3–6) in as many games.

In goal, Team QMJHL’s Samuel Harvey (Rouyn-Noranda Huskies) was outstanding, setting a new CHL event record with 56 saves over two starts. He finished with a 1.53 goals-against average and a .949 save percentage. Team WHL’s Carter Hart (Everett Silvertips) recorded a 20-save shutout in his lone start while Team OHL’s Michael DiPietro (Windsor Spitfires) accounted for the CHL’s other victory, making 23 saves in Game 4. Click here for goalie stats

52 NHL drafted players competed in the series from across the three CHL teams, including 13 first round selections. The Russian National Junior Team included 11 NHL draft picks, with one first rounder.

The series is used as an evaluation for Canada’s National Junior Team that will compete in the 2018 IIHF World Junior Championship to be played in Buffalo, NY.  The tournament will run from December 26 to January 5.