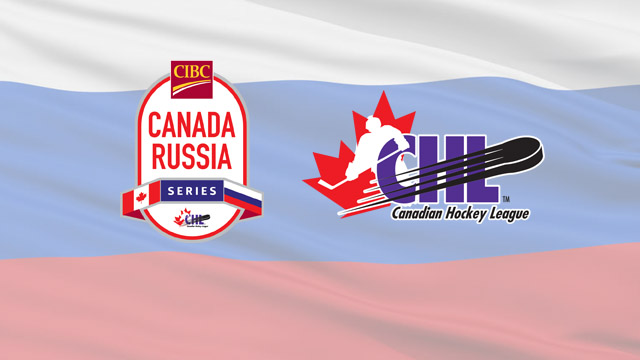 The Canadian Hockey League today announced that a total of eight CHL players will be featured on Team Russia competing in the 2017 CIBC Canada Russia Series.

The full Team Russia roster is still to be confirmed however will include three players from the Quebec Major Junior Hockey League, three from the Ontario Hockey League, and two from the Western Hockey League competing against their regional league counterparts.

The WHL players competing in Moose Jaw on November 6 and in Swift Current November 7 include forward Alexander Alexeyev of the Red Deer Rebels and Broncos defenceman Artyom Minulin who will compete before his home crowd in Game 2.

For OHL games in Owen Sound on November 9 and in Sudbury November 13, Tampa Bay Lightning prospect Alexey Lipanov of the Barrie Colts will compete alongside Edmonton Oilers prospect Dmitri Samorukov of the Guelph Storm and Minnesota Wild prospect Dmitry Sokolov of the Game 4 host Wolves.

In the QMJHL games taking place November 14 in Charlottetown and November 16 in Moncton, Columbus Blue Jackets prospect and reigning QMJHL Player of the Year Vitalii Abramov of the Gatineau Olympiques will compete for Russia with Nashville Predators prospect Pavel Koltygin of the Drummondville Voltigeurs and Philadelphia Flyers prospect German Rubtsov of the Chicoutimi Sagueneens.

The 2017 CIBC Canada Russia Series is supported by title sponsor CIBC, the Official Bank of the CHL, along with associate sponsors Cooper Tires and Sherwin-Williams.  All games will be broadcast nationally on Sportsnet and TVA Sports.