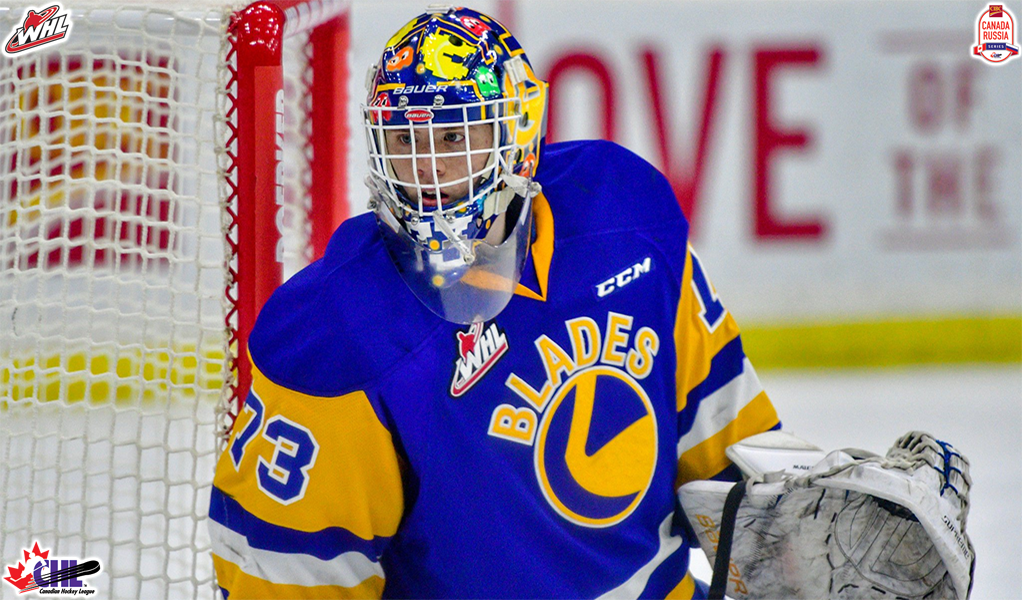 Skating into his crease at the SaskTel Centre on Wednesday, Saskatoon Blades netminder Nolan Maier will enter familiar territory but with one key difference.

Earning the start for Team WHL in Game 5 of the 2019 CIBC Canada Russia Series, Maier will be doing so in front of family, friends, and a host of local supporters as his side makes its debut at the annual event.

As part of a squad that includes league leading scorer and 2020 NHL Draft hopeful Connor Zary of the Kamloops Blazers, as well as a handful of future NHL blue-liners in Ty Smith, Bowen Byram, and Jett Woo, among others, Team WHL faces off against a Russian roster that has come away with six points and a tied series through four games.

“I’ll be fortunate enough to play tonight in my home rink so that’s really exciting for me,” Maier told the Canadian Hockey League. “I’m not taking it too out of control and just going to play my own game. It’s going to be awesome. It’s an honour just being named to the team itself, but with it being in Saskatoon I am familiar with the rink and I am super excited to share the moment with family, close friends, and fans from the area.”

With Team WHL, Maier will also be joined by Blades teammate Chase Wouters, a late addition to the roster who brings another layer of offensive punch to the squad as evidenced by his strong start to the 2019-20 campaign with Saskatoon in which he has collected 18 points counting 10 goals and eight assists across 20 appearances to sit second in team scoring.

“I couldn’t imagine a better guy getting the call and being on the team,” Maier added. “It’s really special for him and I being here.”

Back with the Blades, the duo have been key cogs in helping return the franchise to the winning side of the ledger. Following a five-year playoff absence, the Blades qualified for the postseason last spring thanks in part to a season that saw Maier put on a show between the pipes as he came away with 36 victories across 53 appearances alongside a .910 save percentage that ranked third among WHL netminders who saw as much time in the blue paint.

That success has carried over to the new season as Maier sports a 9-6-1-1 showing in 17 outings that has helped the Blades earn second place in the WHL’s East Division through the first third of the new season.

In returning to the national spotlight since a first-place finish with Team Canada at the 2018 Hlinka Gretzky Cup, Maier and his tournament teammates will be auditioning for a spot to represent the Great White North later this winter when Canada goes for gold at the 2020 IIHF World Junior Hockey Championship in the Czech Republic.

Still, Maier doesn’t plan to let the added pressure of those evaluations to affect his approach with Team WHL.

“There are obviously a couple of add-ons with the event and being able to play internationally, but I am trying to treat it like a regular home game here in Saskatoon,” Maier concluded. “I am excited but I am not trying to think about it too much.”