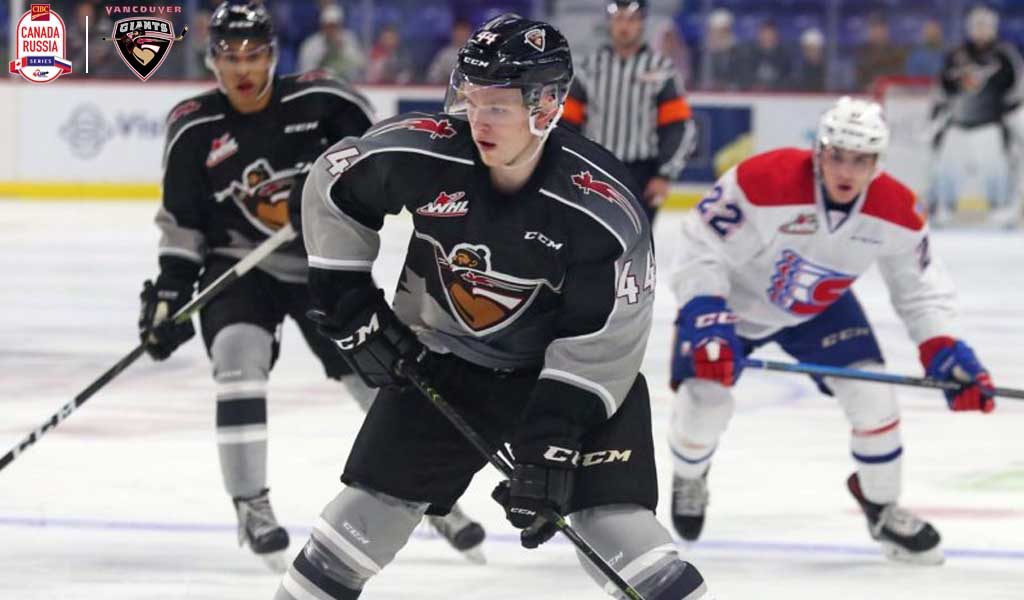 The Western Hockey League is a hot spot for scouts this season as NHL clubs try and get a glimpse of the league’s seven ‘A’ rated prospects on NHL Central Scouting’s October Players to Watch List.

November’s edition is set to come out in the coming days and one of the two defencemen in that upper echelon of draft eligible Western Hockey League talent is hitting the ice again tonight, doing so with the WHL logo on his chest.

“It’s definitely cool to be recognized as a younger guy in the league, so I’m one of the kids in the locker room but there’s a few of us this year so that makes it a little easier,” he said with a laugh. “I’m here to compete and try my best so that I can hopefully represent Canada again in the near future.”

Byram is no stranger to the brass at Hockey Canada, having worn red and white at the 2017 World Under-17 Hockey Challenge where he earned Silver with Team Canada Red. He also suited up as an underage player with Canada’s National Under-18 Team in the 2018 IIHF World Under-18 Hockey Championship. Most recently, Byram helped Canada capture gold this past summer in Alberta at the 2018 Hlinka Gretzky Cup, recording four points (1-3–4) in five games.

“Yeah that was a really fun experience,” said Byram, reflecting on his time alongside other WHL draft targets in Dylan Cozens (Lethbridge Hurricanes), Kirby Dach (Saskatoon Blades), Payton Krebs (Kootenay ICE), Josh Williams (Medicine Hat Tigers) and Matthew Robertson (Edmonton Oil Kings) in Edmonton. “I think it speaks volumes to the kind of talent we have in the WHL right now and to be able to pull together and win that for Canada was unforgettable.”

The son of former WHL forward and long-time British Elite League standout Shawn Byram, Bowen grew up in Cranbrook, BC and fell in love with the Kootenay ICE at an early age. The 2011 WHL Champion ICE club brings back great childhood memories at the rink.

Bowen Byram’s quest for a spot on Team Canada goes through LEC on Tuesday https://t.co/d6Edl6AMW0 pic.twitter.com/1eIGtpyjzE

“I really liked watching Cody Eakin,” he said. “I’m a defenceman, but he was always a lot of fun to watch and I remember when Kootenay got him at the deadline from Swift Current. He made a really big impact and helped them get to the Memorial Cup.”

Now 27-years-old, Eakin is well into his NHL career and reached the Stanley Cup Final with the Vegas Golden Knights last spring. Now it’s the 17-year-old Byram’s time to strive toward making his transition to the next level.

There’s a lot of hype surrounding Byram ahead of next summer’s NHL Draft in Vancouver, but he’s not playing it up too much. He’s found a fountain of wisdom in Giants associate coach Jamie Heward, a former WHL standout with the Regina Pats who went 16th overall to the Pittsburgh Penguins back in 1989. Heward played 394 career NHL contests and helped the Swift Current Broncos capture a WHL Championship as an assistant there last spring.

“We’ve been through it before. We’ve had some conversations about it,” Byram told The Province’s Steve Ewen. “The biggest thing is making sure it’s not my priority. My priority is to help the Vancouver Giants.

“I try to keep it all out and not let it be a distraction.”

And help the Vancouver Giants he has.

Vancouver currently leads the BC Division with a 12-3-2-0 record and factored into the Kia CHL Top 10 Rankings for the fifth time this season last week. Byram’s 14 points (5-9–14) are tied for the team lead in scoring, placing him tied for sixth amongst WHL blueliners.

“Since we’ve come in at the start of the year the goal has been to win a Memorial Cup,” he noted. “We’re pushing ourselves to get better and hopefully at the end of the year we’ll be in Halifax.”

Byram joins teammate Tendeck in following in the footsteps of a pair of recent Giants to compete in the series in Tyler Benson and Ty Ronning (2016). Vancouver hosts for a second time following a 1-0 WHL shootout victory at the Pacific Coliseum back in 2012.

Byram and his Team WHL teammates are back in action tonight on Sportsnet when RJ Broadhead and Sam Cosentino provide the call for Game 2 of the CIBC Canada Russia Series at 10 PT/7 ET.