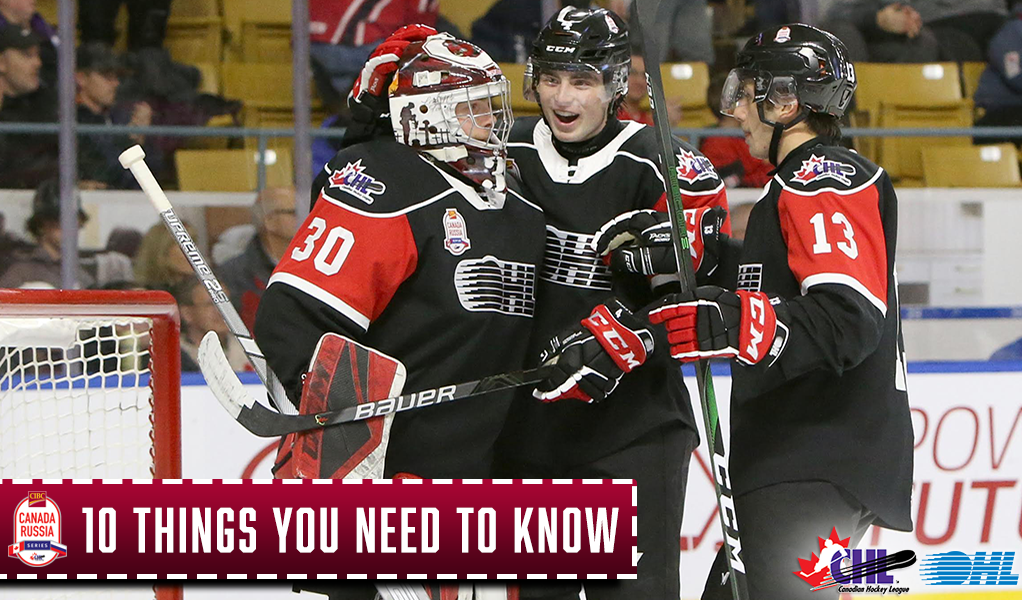 The 2019 CIBC Canada Russia Series continues Monday with Game 4 featuring Team OHL and Team Russia. Here are 10 things you need to know ahead of puck drop:

100th Game: Monday’s contest marks the 100th game in series history, dating back to 2003 when the premiere game was held in London. That night saw Team OHL skate to a 7-1 victory thanks to a two-goal, one-assist performance from Oshawa Generals forward Ben Eager. In all, London has twice previously hosted the event (2003, 2010).

World Junior evaluation: Often used as a springboard for national representation at the IIHF World Junior Hockey Championship, Russia has medaled 13 times at the year-end tournament since 2003, including a gold-medal finish in 2011. Canada has medaled 12 times including seven golds in the same stretch. The 2019 edition saw nine OHL talents join Team Canada on the national stage.

Top performers: Leading the way for the OHL in Game 3 in Kitchener included Niagara IceDogs forward Akil Thomas, who finished with a goal and an assist, and Sudbury Wolves forward Quinton Byfield, who picked up a pair of helpers. Also scoring for Team OHL en route to the 4-1 victory was Ty Dellandrea (Flint Firebirds), Connor McMichael (London Knights), and Cole Perfetti (Saginaw Spirit).

All Russian lineup: After including at least one Russian-born CHL talent in their lineup for the first three games of the series, Team Russia will bring a new look for Game 4 with a lineup composed of players who all currently compete in Russia. Leading the way for the team is defenceman Nikita Zorkin who has collected two assists in three games.

Prospect central: A total of 62 NHL prospects are competing in the 2019 CIBC Canada Russia Series, with 28 of the 31 NHL clubs represented by at least one player. The Vegas Golden Knights lead the way with five, followed by the Los Angeles Kings, Minnesota Wild, and St. Louis Blues each at four. In Game 4, three NHL teams lead the way with two players each, including the Columbus Blue Jackets (Angle, Foudy), Dallas Stars (Dellandrea, Harley), and Los Angeles Kings (Dudas, Thomas).

Lest We Forget: Part of Game 4’s pregame ceremony includes Sergeant Mike ‘Smokey’ Cashman with the Canadian Military Fire Service from 1973-2010, including a United Nations peace keeping tour in Israel, as well as Sergeant Mike Newcombe, who joined the military in 1981 as an infanteer with the Royal Canadian Regiment, serving for 25 years, including deployment to the first Gulf War in Desert Storm.