Get to know Team WHL 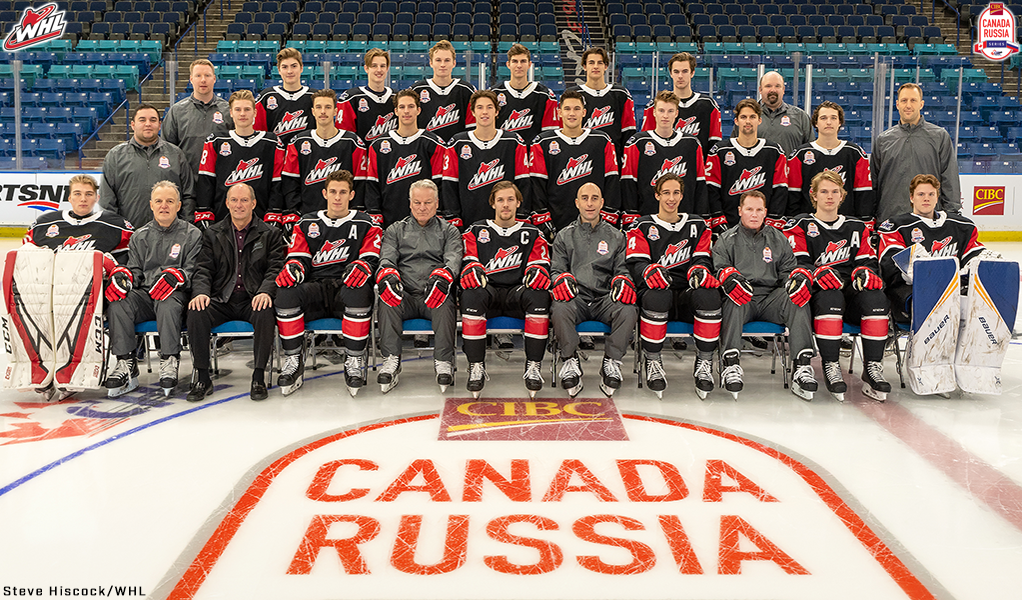 Here’s a closer look at the 20 players who will compete for Team WHL in the 2019 CIBC Canada Russia Series November 13 and 14 in Saskatoon and Prince Albert.

Calen Addison – Pittsburgh Penguins prospect returns to Team WHL for a second straight season and enters 2019 as the group’s top scoring defenceman with 19 points in 20 games for the Lethbridge Hurricanes.

Adam Beckman – Third round pick of the Minnesota Wild after finishing second in WHL rookie scoring with 62 points in 68 games now ranks seventh overall in the league with 27 points through 17 games with the Spokane Chiefs.

Bowen Byram – Colorado Avalanche fourth overall pick began the season with five points in his first three games and now has 14 points in 18 appearances for the Vancouver Giants and will wear an ‘A’ for Team WHL after making his series debut a year ago on home ice.

Ryan Chyzowski – Medicine Hat Tigers veteran forward has 22 points in 19 games powered by a 10-game point-streak from October 4 to November 2 which ranks as the league’s fourth best stretch.

Dylan Cozens – Buffalo Sabres eighth overall pick will serve as an alternate captain for Team WHL and ranks fifth in league scoring with 28 points including 13 goals having recorded a point in 16 of his 19 games for the Lethbridge Hurricanes this season.

Carson Focht – Vancouver Canucks fifth round pick leads the Calgary Hitmen in scoring with 18 points in 16 games in a season that began with points in his first five appearances where he averaged two points-per-game.

Cole Fonstad – Montreal Canadiens prospect has had a hot start since joining the Everett Silvertips last month as he has recorded eight points in five games with his new squad.

Nolan Foote – Tampa Bay Lightning first round pick was recently appointed captain of the 2020 Memorial Cup host Kelowna Rockets and will serve as a Team WHL alternate entering the series tied for 11th in league scoring with 24 points in 17 games.

Dillon Hamaliuk – San Jose Sharks prospect, who offers great secondary scoring with the Rockets as he has recorded 11 points in 19 outings, will have a chance at a Memorial Cup title this spring when Kelowna hosts the 2020 Memorial Cup presented by Kia.

Joel Hofer – Through the early goings of 2019-20, the St. Louis Blues up-and-comer who has already been twice recognized as the WHL Eli Wilson Goaltending Goaltender of the Week owns an incredible 1.90 goals-against average that tops the charts in the WHL.

Kaedan Korczak – The budding blue-liner and Vegas Golden Knights prospect continues to grow his offensive game this season as he has already tallied 14 points across 19 appearances.

Nolan Maier – Blades netminder will get the call between the pipes for Game 5 from his home barn in Saskatoon.

Braden Schneider – Brandon Wheat Kings blue-liner is one of two draft eligibles from Team WHL who projects as a first-round selection at the coming NHL Draft in Montreal.

Ty Smith – The New Jersey Devils prospect and Spokane Chiefs captain will lead the way for Team WHL as he aims to earn a second showing with Team Canada at the world juniors.

Brayden Tracey – Anaheim Ducks first round pick led all WHL rookies in scoring last season with 81 points in 66 games but has played just five games so far this season for the Moose Jaw Warriors since returning from injury.

Chase Wouters – Saskatoon captain, who already has 18 points through 20 games on the season, is a late addition to the roster who will join his teammate Nolan Maier in representing the Blades in Game 5.

Josh Williams – Joining the Oil Kings midway through 2018-19, the budding scorer has reached a new offensive level this season as he’s scoring above a point-per-game pace with 10 goals and 11 assists in 20 outings.

Jett Woo – Vancouver Canucks prospect joined the Calgary Hitmen this summer after shining with the Moose Jaw Warriors a year ago as he tallied 66 points to finish fifth in scoring among all rearguards.

Connor Zary – 2020 NHL Draft prospect was recently given an ‘A’ rating by NHL Central Scouting and currently leads the WHL in scoring with 30 points including 13 goals in 19 games for the Kamloops Blazers.

Peyton Krebs of the Winnipeg ICE and Kirby Dach of the Chicago Blackhawks were originally named to Team WHL but will not compete in 2019.