Kids coming out to play for Team WHL 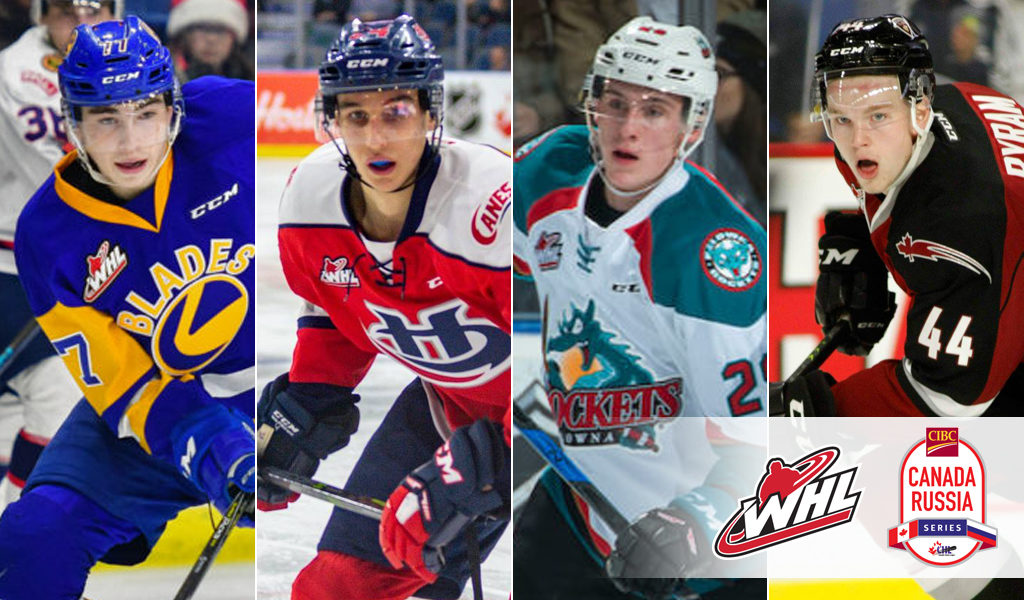 The 2018 CIBC Canada Russia Series is just two weeks away, and while it will be hard to top last year’s edition that required a series-determining shootout in Moncton, there’s plenty to get excited about ahead of the event’s 16th instalment.

As has been the case for the past four years, the series will begin in the Western Hockey League as the Kamloops Blazers and Vancouver Giants serve as hosts on November 5th and 6th.

The roster is here! Meet the 20 players who will represent Team WHL at the 2018 @cibc #CANvsRUS Series this November!

“It’s good to have the mix of some younger guys in there because they get the torch passed to them as things go along,” said Tim Hunter (Moose Jaw Warriors), head coach of Canada’s National Junior Team. “There’s a lot of them that have been involved with Hockey Canada before at the Under-17 and Under-18 level and they’re there on their own merits.

“Cozens, Dach and Byram had real good Hlinka-Gretzky tournaments and Foote is off to a great start this season.”

In addition to seeing the four NHL Draft targets, Hunter is eager to get another look at several players who attended Hockey Canada’s National Junior Team Development Camp this past summer in Kamloops.

It’s fitting that both WHL games take place in British Columbia with this year’s World Junior Tourmanent slated for Vancouver.

“Kamloops is a great hockey town,” Hunter told the WHL Radio Show’s Jon Keen. “We had our showcase there in the summer and we had a great fan turnout there and they had a chance to see some of the players in some of the games. Then we get down to the lower mainland to let some of the Vancouver-area people see what we’re all about.

2019 #NHLDraft prospect Kirby Dach of the @BladesHockey was named the CHL Player of the Week to begin the 2018-19 regular season.

“We’re going to have the Russian team in our pool this year,” he added, “so it will give us a feel of what they’re all about, what type of players they have and style of play they’re going to play.”

Team WHL features 11 players selected in the opening two rounds of the NHL Draft. In 30 games against Russia all-time, the WHL has played to an overall record of 20-7-1-2.

The series gets underway on Monday November 5th when Kamloops hosts for a record-tying fourth time.