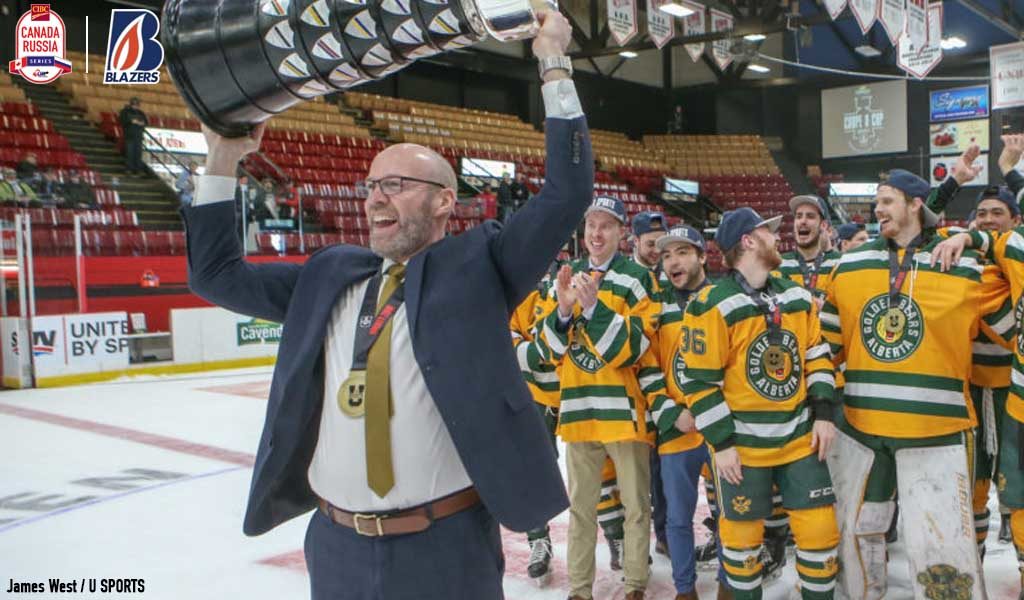 Serge Lajoie is back where his junior hockey journey started, before the great Kamloops dynasty years in the early and mid-90’s.

Lajoie, who enjoyed a brief cup of coffee as a Blazer during the 1986-87 season, became the newest head coach of the well-known franchise this past June after years of consistent success on the ice and behind the bench with the University of Alberta Golden Bears.

The @blazerhockey have hired Serge Lajoie as their new Head Coach!

Lajoie was also a prominent Golden Bear on the ice from 1988-93, claiming Mervyn ‘Red’ Dutton Trophy honours as Canada West Defenceman of the Year in 1993 before four years playing professionally in Germany.

“I think for me, just knowing the skills, mindset and habits a player needs to move on from the WHL and be successful at the next level is a real asset,” Lajoie noted. “There are some programs at the U SPORTS level that aren’t too far below the level of professional hockey, and I think having a first-hand understanding of what it takes to excel in that environment allows me to help players establish that foundation for themselves.

“The game really isn’t all that different in University,” he added. “You’re really at the mercy of the habits you build in practice, so that’s probably one of the biggest things.”

Lajoie, whose son Marc was a first round pick of the Tri-City Americans in the 2018 WHL Bantam Draft, takes on a lead role in Kamloops where a Blazer franchise that has missed the playoffs in three of the past five seasons is looking to make a resurgence in the WHL’s BC Division.

“Our cornerstones here have to be hard work and enthusiasm,” said Lajoie of his vision for the franchise moving forward. “It’s just loving being at the rink, enjoying the grind, enjoying the fact that you’re going to work hard and finding that satisfaction in that, when you work hard, good things happen.”

The club is off to a 6-7-1-1 start to the season, seeing flashes of promise in a recent four-game winning streak that included three in Seattle and Portland.

Excellence is demonstrated from the highest reaches of the organization in Kamloops.

“When you look at what made those guys successful during their time as Blazers, it all comes down to habits and values,” said Lajoie. “What kinds of traditions were in place back in their era? We don’t want our players to be overwhelmed with the task of having to replicate that level of success overnight, but we do want them to feel a sense of responsibility of building and maintaining a winning culture and leaving this program in better shape than when they first arrived.”

“We’re still very relevant here in the community and across Canada,” said Lajoie. “We’re a good number of years removed from the dynasty era, but you still get the sense that the community is eager to support a winning tradition, and that’s one we’re working hard to get rooted and established.”

Kamloops hosts the opening game of the 2018 CIBC Canada Russia Series tonight, doing so for a record-tying fourth time following events in 2006, 2010 and 2015.

The CHL has won three straight series, though last year’s was decided by a shootout for the first time ever as Team QMJHL’s Samuel Harvey (Rouyn-Noranda Huskies) and Maxime Comtois (Victoriaville Tigres) came through with key performances in Moncton.

The puck drops at 10:00pm PT/7:00pm ET as RJ Broadhead and Sam Cosentino provide the call from coast-to-coast on Sportsnet.