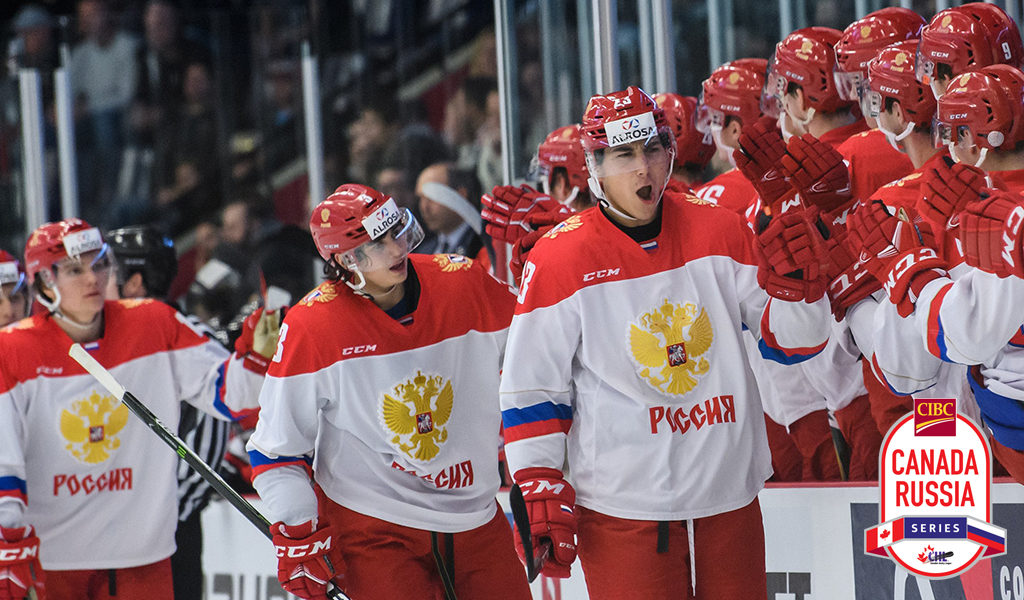 Sherbrooke, QC – For the first time in the 2018 CIBC Canada Russia Series, Russia is in control.

Four QMJHL additions and a 33-save performance from Pyotr Kochetkov powered Russia to a 5-1 win in Sherbrooke, giving them their first series lead to this point.

San Jose Sharks prospect Ivan Chekhovich (Baie-Comeau Drakkar) earned Player of the Game honours for Russia with a goal and an assist while Pavel Koltygin (Drummondville Voltigeurs) and Alexander Khovanov (Moncton Wildcats) both had a pair of assists. Calgary Flames pick Dmitry Zavgorodniy (Rimouski Oceanic) rounded out Russia’s QMJHL quartet with a goal in the win as the opportunistic Russians struck for five goals on just 17 shots.

“The effort was there, but obviously it’s not the result that we wanted,” said Team QMJHL head coach Jim Hulton post-game. “I thought we had trouble getting some momentum. We gave up the early goal. I thought we started out and had some good legs and then we were chasing the game a little bit at 1-1. The turning point was that third goal. If we get out of the second period at 2-1 I think our legs and our energy are there but unfortunately they capitalized.

“They didn’t have a lot of chances but they’re a good team and they capitalized on the ones that they had.”

The line of Koltygin alongside Ivan Muranov and Nikita Shashkov worked wonders early, opening the scoring with Shashkov’s first of the event 3:03 into action.

Team QMJHL outshot Russia 13-3 in the middle stanza, but solid netminding from Kochetkov paired with a late goal from Zavgorodniy from Khovanov and Chekhovich wiped out any momentum the QMJHL had gained.

Kirill Slepets and Chekhovich scored within a minute of each other just beyond the midway point of the third to put Russia up 5-1 and that’s the way things would stay as Russia climbed into a 9-6 series lead in points headed into Thursday’s series finale in Drummondville.

Big @QMJHL contributions to the @russiahockey_en 🇷🇺 cause in Game 5.

Russia skates to a 5-1 win in Sherbrooke to take a 9-6 @CIBC #CANvsRUS lead in points.

Kochetkov becomes the third Russian goaltender in event history to earn three wins in a series as Russia has now outscored the CHL 14-7, holding the three leagues to a collective 0-for-16 mark on the power play.

The five goals are the most Russia has scored against the QMJHL in the event since 2012.

“They delivered exactly as advertised,” said Hulton of the Russian performance. “The one thing we talked a lot about is how active their defence are in defending. They do a really good job challenging one-on-one immediately and you have to play a chip-and-support game. I think we got caught a little bit by surprise in that our guys just aren’t used to seeing that.”

For the second straight year, Game 6 will decide the series. The puck drops on Thursday night at Centre Marcel Dionne in Drummondville, QC as five Voltigeurs look to bring Team QMJHL back from the brink when the puck drops at 7 ET/4 PT on Sportsnet and TVA Sports.