Suzuki and Timmins connect as Team OHL strikes back in Sudbury 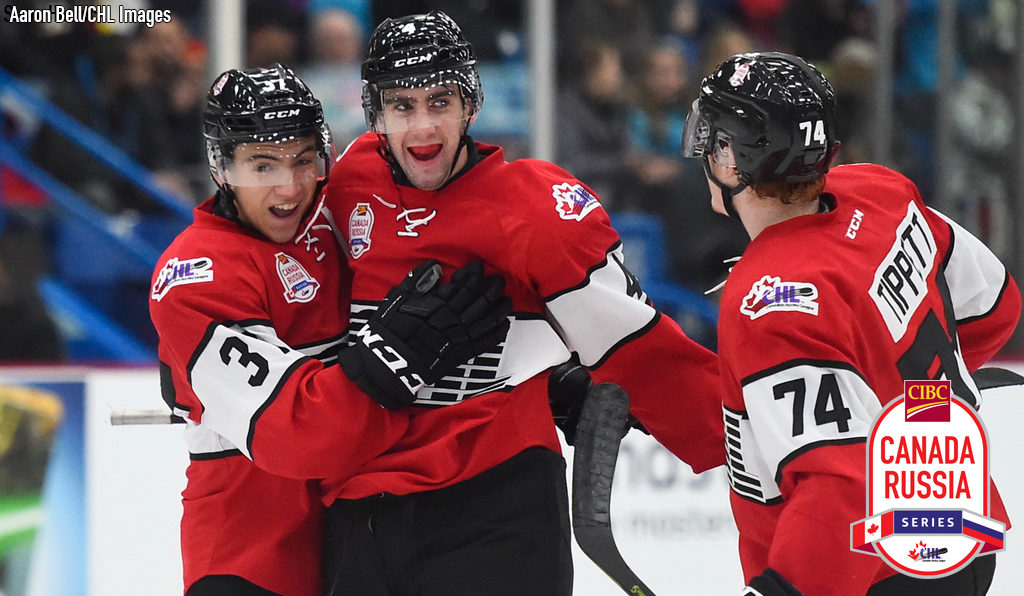 Team OHL rebounded from a 5-2 loss in Game 3 as a pair of quick third period goals broke open a 2-2 tie. Suzuki scored his second of the night for the game winner 4:09 into the final frame.

“We didn’t want to come here and go down 0-2 against the Russians, so it was good to get the job done tonight,” said Suzuki post-game. “I thought the whole team worked really hard and we got the result we wanted.”

“When you’re on a power play with a guy like Suzuki and others like Tippett, Katchouk and Gadjovich, you just want to move the puck and let them do their thing,” said Timmins of his approach. “That worked out nicely for us tonight.”

“I really liked our compete level again,” Letowski noted. “Our power play is really dangerous and it played a big factor in the game and I thought DiPietro was very solid in net and made some good saves when he had to.

“Overall our guys dug in and we really wanted to get that one,” Letowski added. “Obviously we weren’t happy with the loss in Owen Sound. The boys are proud of being here and representing the league and they wanted to have a good showing. I thought we did that tonight.”

The Owen Sound tandem of Gadjovich and Suzuki went to work offensively early on Team OHL’s first power play of the night at 3:12 of the first. The former provided a screen in the slot while the latter ripped a wrister over the shoulder of Vladislav Sukhachev in the Russian crease to put Team OHL up 1-0.

After being outshot 6-1 in the opening five minutes of action, Russia responded at 6:36 as Chicago Blackhawks prospect Andrey Altybarmakyan forged a lane to the net and beat DiPietro on a forehand move off the rush.

Sukhachev provided some timely saves in the latter half of the first period, stopping Gadjovich on a backhand opportunity before getting a little help from his post as Jonathan Ang (Peterborough Petes) struck iron inside the final minute.

Both goaltenders provided big glove saves in the opening shifts of the second as both Sukhachev and DiPietro kept the score knotted at one before a local fan favourite used his big shot to put Russia in the lead.

After a pair of failed OHL clearing attempts, Sudbury Wolves star Dmitry Sokolov drifted through the slot and took a pass from Artyom Manukyan to beat DiPietro under the crossbar at 8:29.

Team OHL re-established the tie just over three minutes later as the power play struck again. After being set up by Timmins earlier in the game, Suzuki returned the favour, putting the puck on a tee for the Colorado Avalanche prospect who blasted home a slapshot at 11:53.

The OHL carried its momentum from a strong second over into the third as Suzuki picked up his second goal and third point of the night at 4:09.

Suzuki was sprung in alone on an outlet pass from Timmins, dekeing to the forehand before sliding a low shot through the legs of Sukhachev to give Team OHL a 3-2 edge. Owen Sound Attack teammate Sean Durzi also picked up an assist on the go-ahead goal.

DiPietro stood his ground in the late going, but Team OHL tightened things up and held the Russians to just six shots on goal in the final frame to take a 4-2 victory.

The OHL outshot Russia 33-25 and went 2-for-6 on the power play while limiting their opponents to just one power play opportunity.

Team OHL improves to an all-time record of 24-5-1 in the CIBC Canada Russia Series while Russia drops to 1-13-0-1 all-time in Game 4 of the series.

The series shifts to Charlottetown, PEI on Tuesday night as Team QMJHL awaits Russia for Game 5. The action gets underway at 7:00pm ET/8:00AT on Sportsnet East, Ontario and Pacific.