Team OHL comes together for clash with Russia 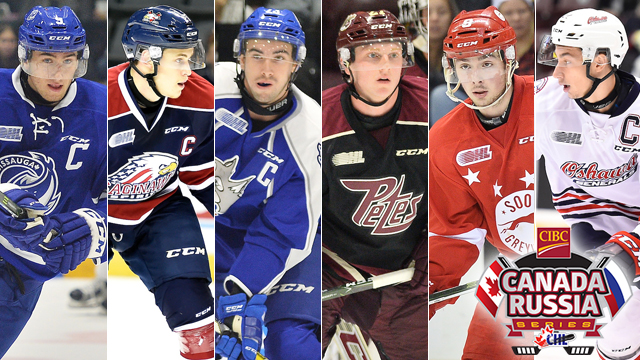 The OHL’s top Canadian talent comes together in North Bay on Thursday and in Hamilton on Monday for Games 3 and 4 of the 2016 CIBC Canada Russia Series.

Despite holding a 22-3-1 all-time record against Russia in the event, all four OHL losses have come within the past four years. After the Russians put up a good fight against the WHL in Games 1 and 2, there will be no underestimating them from the OHL point of view.

“I had a chance to see some of the first two games,” said Peterborough Petes defenceman Matt Spencer who is suiting up in his third CIBC Canada Russia Series. “They look like they’ve brought a good team this year, perhaps even stronger than in years past.”

A second round pick of the Tampa Bay Lightning in 2015, Spencer isn’t concerned about the need for he and his OHL teammates to get on the same page in short order.

“When you get a room full of really talented hockey players, you’d be surprised how fast they can come together,” he said. “We all come from different teams that play in various structures, but there’s also a lot of familiarity here. A lot of us have played together in the past.”

Fellow Lightning prospects Mitchell Stephens (Saginaw Spirit) and Anthony Cirelli (Oshawa Generals) are also suiting up for Team OHL in North Bay on Thursday. Stephens was announced as the team’s captain on Wednesday.

“It’s an honour,” he said of the title, “but leadership isn’t something this group lacks. There are a number of captains in our dressing room. I just want to lead by example and try and set the tone for the group. You don’t have to get any of these guys up for a game like this.”

“At the international level, everyone raises their game and I know I raise mine when I put on the Canadian jersey,” he said. “The play develops faster, the guys are quicker, and you have to adapt quickly to playing on a big stage.”

“The Russians are tenacious,” Stephens continued. “They’re fast, skilled and they want to win badly. I think this sets up as a good challenge for us.”

Stephens suits up in his first CIBC Canada Russia Series on Thursday night, and will have the unique opportunity of playing alongside cousin Owen Tippett (Mississauga Steelheads) for the first time.

“It’s going to be a special night for our family,” Stephens said. “It’s not something we’ve ever been able to do at this level, so I’m really looking forward to sharing the ice with him.”

Team OHL comes off its first two-game sweep of Russia since 2011 last year, taking a 3-0 shutout victory in Owen Sound before following up that effort with a 2-1 win in Windsor. 15 players from last year’s OHL roster return to the event this year.

Game 3 of the 2016 CIBC Canada Russia Series from North Bay can be seen live across the country on Sportsnet ONE at 7:00pm ET.