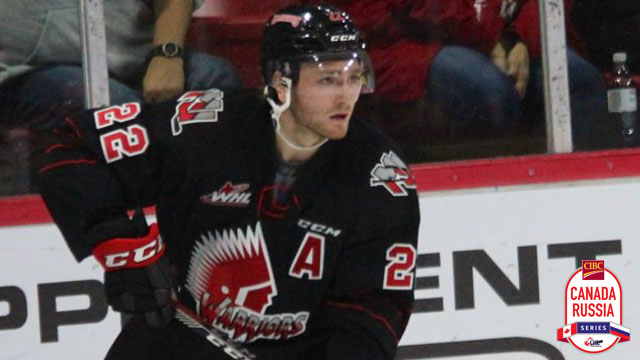 He will replace forward Tyler Benson (Vancouver Giants) who recently made his season debut after returning from a lower-body injury October 27.

A product of Beaumont, Alta., the 6-foot-0, 188-pound Gregor was originally a third-round selection, 55th overall, of the Victoria Royals in the 2013 WHL Bantam Draft. In 147 career WHL regular season games, all with the Warriors, Gregor has 158 points (65G-93A) as well as 72 penalty minutes. Of his 65 goals, 23 have come on the power play while 12 have been game-winners.

Gregor comes to Team WHL with international experience, having represented Canada at the IIHF World U18 Championship in 2016, where he had two assists in seven games. Adding Gregor to the roster gives the Warriors two players on this year’s Team WHL. Warriors captain and Tampa Bay Lightning prospect Brett Howden is serving as part of the team’s leadership group led by Kelowna Rockets forward and Calgary Flames draft pick Dillon Dube.

Team WHL will face Team Russia in Game 1 of the 2017 CIBC Canada Russia Series in Moose Jaw, Sask., on Monday, November 6, before continuing on to Swift Current, Sask., for Game 2 on Tuesday, November 7. The Ontario Hockey League will host Games 3 and 4, while the Quebec Major Junior Hockey League will welcome the festivities surrounding Games 5 and 6.

The 2017 CIBC Canada Russia Series is supported by title sponsor CIBC, the Official Bank of the CHL, along with associate sponsors Cooper Tires and Sherwin-Williams. All games will be broadcast nationally on Sportsnet and TVA Sports.