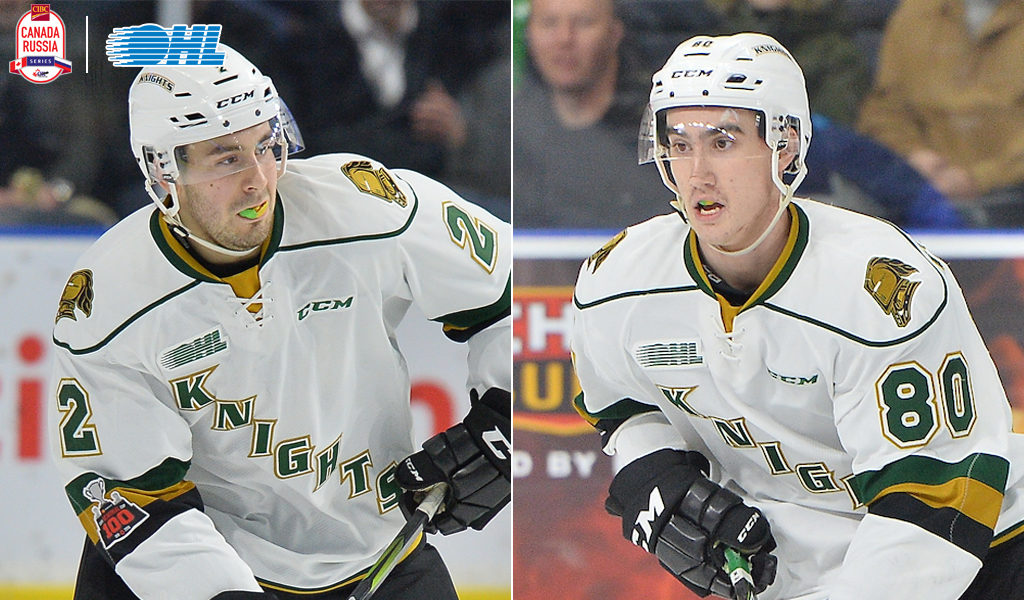 Toronto, ON – The Ontario Hockey League, in collaboration with the Canadian Hockey League and Hockey Canada, announced today that London Knights defenceman Evan Bouchard and forward Alex Formenton have been added to Team OHL’s roster for the 2018 CIBC Canada Russia Series.

Bouchard will compete for Team OHL in Game 3 of the series to be played in Sarnia on Thursday November 8, while Formenton will dress for Game 4 in Oshawa set for Monday November 12.  Both players were re-assigned to the Knights from their NHL clubs on Friday.

Bouchard, a 19-year-old from Oakville, Ont., returns from the Edmonton Oilers where he played seven games and scored one goal after being chosen tenth overall in the 2018 NHL Draft.  The Knights captain not only led his team in scoring last season but finished first among all OHL rearguards producing 87 points in 67 games.  Originally a first round pick by London in the 2015 OHL Priority Selection, he has played in 178 career games amassing 148 points for the green and gold helping them win a Memorial Cup during his rookie season.  Bouchard also returns to Team OHL after competing in both event games last season.

Formenton, a 19-year-old from King City, Ont., returns from the Ottawa Senators having played in nine games to start the 2018-19 campaign where he scored one goal.  The second round pick in the 2017 NHL Draft is also a returning member of Canada’s National Junior Team winning gold last January in Buffalo.  In the 2017 CIBC Canada Russia Series he earned Player of the Game honours in Owen Sound despite Team OHL’s 5-2 loss.  Originally an 11th round pick by the Knights in 2015, his two-year totals include 45 goals and 37 assists for 82 points in 113 games played.