Harvey the difference as Team QMJHL triumphs in Charlottetown 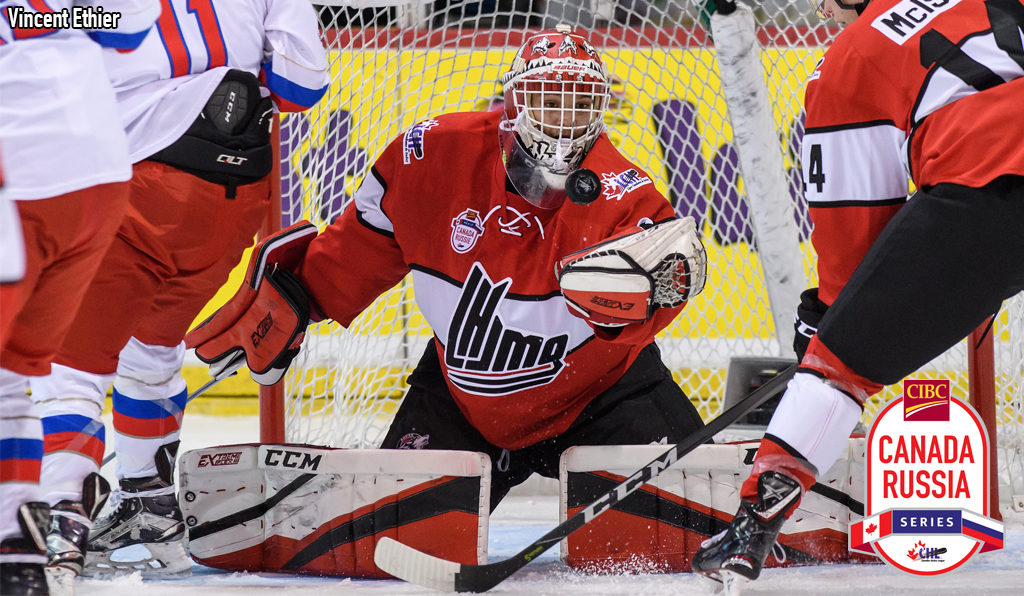 Charlottetown, PEI – Russia came out firing early but Team QMJHL finished strong, outlasting their opponent in a 3-1 victory in Game 5 of the CIBC Canada Russia Series.

“He had a strong game for sure and made some key saves at the right moments,” Team QMJHL head coach Dominique Ducharme (Drummondville Voltigeurs) said of Harvey, who became the Rouyn-Noranda Huskies all-time goaltending wins leader last week. “We need to be good at every position and we were certainly good in net tonight. He stood out for sure.”

Team Russia came with intensity in the early moments of Game 5, forcing Harvey into some big saves in order to keep his team in the game.

After Team QMJHL failed to record a shot on goal in the opening nine minutes of action, their first quality chance went into the net as Shawn Boudrias (Gatineau Olympiques), a former Islander, brought the Charlottetown faithful to their feet.

QMJHL captain Peter Abbandonato (Rouyn-Noranda Huskies) won an offensive zone draw as Boudrias carved a path to the net, snapping a quick shot over the shoulder of Alexey Melnichuk at 12:31.

The Russians responded under three minutes later as Chicago Blackhawks prospect Andrey Altybarmakyan scored his third of the series. Speedy linemate Alexey Polodyan forced a turnover at the Russian blue line, carrying the puck up ice to force a rebound off the pad of Harvey that found its way straight onto the stick of an oncoming Altybarmakyan who tied the score at one.

Russia carried the play, outshooting the QMJHL 11-6 in the first frame.

Harvey’s fine play carried over into the second stanza as the 19-year-old provided a breakaway save off Damir Rakhimullin and turned away Maxim Rasseykin on a one-timer in the slot moments later.

Team QMJHL managed to hold Russia’s power play at bay, being outshot 8-5 in the second for a two-period total of 19-11.

Ottawa Senators prospect Drake Batherson (Cape Breton Screaming Eagles) put Team QMJHL in the lead for good 4:11 into the third period, striking for the team’s second power play marker of the night. 2018 NHL Draft prospect Joe Veleno (Saint John Sea Dogs) moved a puck down low to Anaheim Ducks draftee Maxime Comtois (Victoriaville Tigres) who made a power move to the net, creating an opportunity in the slot as Batherson cleaned up a loose puck in the crease.

The grind of five games in three different provinces over the past week seemed to catch up with the Russians in the third period as they were limited to seven shots in the final 20 minutes but still managed to outshoot the QMJHL 26-24 on the night.

Nicolas Guay (Drummondville Voltigeurs) would add an unassisted empty net goal with 27 seconds remaining to secure a 3-1 victory for Team QMJHL, giving them four straight wins against Russia dating back to 2015.

Team QMJHL went 2-for-3 on the man advantage while holding Russia to an 0-for-5 mark. The Russians are now 1-for-13 on the power play throughout the series.

“I really liked the way our young guys performed,” Ducharme added post-game. “You could see at the beginning we needed to make an adjustment but we got better and better and I really liked our third period.

“We managed the game well, we were good on the power play and we didn’t give them much late in the game.”

Up 9-6 in points, a QMJHL win on Thursday in Moncton would secure a third straight series victory for the Canadian Hockey League.

Thursday’s Game 6 will be the final CIBC Canada Russia Series matchup held at the Moncton Coliseum that will give way to a brand new facility set to open in September 2018.

Catch the series finale Thursday on Sportsnet East, Ontario and Pacific when the puck drops at 7:00pm ET/4:00pm PT.