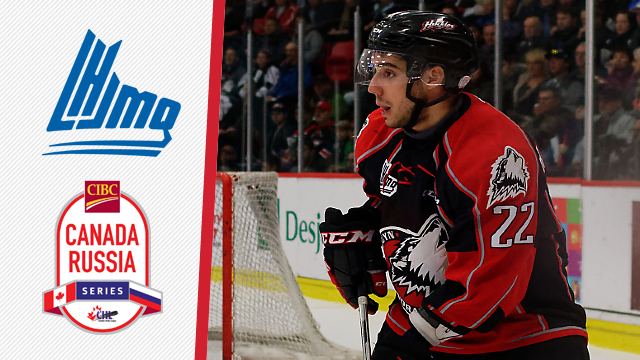 The Quebec Major Junior Hockey League, in association with the Canadian Hockey League, announced today that Peter Abbandonato of the Rouyn-Noranda Huskies will serve as Team QMJHL Captain for Games 5 and 6 of the 2017 CIBC Canada Russia Series held in Charlottetown and Moncton.

In addition, the League announced that Anaheim Ducks prospect Antoine Morand of the Acadie-Bathurst Titan will serve as an alternate captain, along with Arizona Coyotes prospect Pierre-Olivier Joseph of the Charlottetown and Ottawa Senators prospect, Drake Batherson of the Cape Breton Screaming Eagles.

Abbandonato is in his third season in the Rouyn-Noranda Huskies uniform. The Laval native is currently tied for eleventh in QMJHL scoring with six goals and 18 assists for 24 points in 21 games. The 19-year-old was a 2nd round pick by Rouyn-Noranda in 2014. He helped his team win the President Cup in 2016, defeating the Shawinigan Cataractes four games to one. The Huskies eventually lost a heartbreaking game to the London Knights by a 3-2 score in the 2016 Mastercard Memorial Cup final.

Morand is a returning member of Team QMJHL that won the Canada Russia Series in 2016. The Titan alternate captain is also tied for eleventh in QMJHL scoring with eight goals and 16 assists for 24 points in 20 games this season for the Acadie-Bathurst Titan. The 18-year-old from Mercier was selected by the Ducks in the second round of the 2017 NHL Draft.

Joseph currently serves as captain of the Charlottetown Islanders. The 5th round pick by Charlottetown in 2015 helped his team reach the QMJHL semifinal in 2016-17, but the Isles were defeated in six games by Blainville-Boisbriand. A few weeks later, the Laval native became a first round pick (23rd overall) of the Arizona Coyotes in the 2017 NHL Draft. This season, Joseph sits in 14th position among QMJHL defencemen with two goals and 12 assists for 14 points in 18 games.

Batherson is atop the QMJHL’s scoring race with 34 points in 20 games, that include 17 goals and 17 assists for the Cape Breton Screaming Eagles. Drafted in the 4th round by the Ottawa Senators in the 2017 NHL Draft, the Fort Wayne, USA, native had a difficult journey before getting into the QMJHL and earning a regular role in the league. His work ethic and his determination paid off and he is now serving as an alternate captain of the Screaming Eagles.

All games of the 2017 CIBC Canada Russia Series will be available online through NeuLion’s CHL streaming platform at http://chl.neulion.com/chl/.

All games of the 2017 CIBC Canada Russia Series will also be broadcast on the NHL Network U.S. the following day, at 10:00 am ET.

The 2017 CIBC Canada Russia Series is supported by title sponsor CIBC, the Official Bank of the CHL, along with associate sponsors Cooper Tires and Sherwin-Williams.