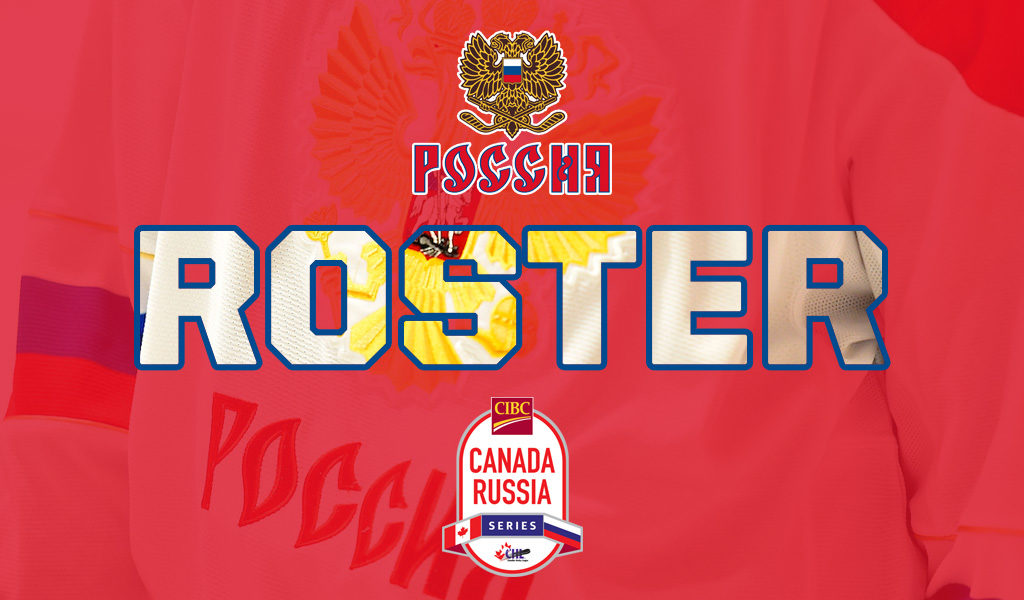 Toronto, ON – The Canadian Hockey League in association with the Russian Ice Hockey Federation today announced the roster for Team Russia that will compete in the 2018 CIBC Canada Russia Series which takes place November 5-15.

A team of 23 Russian players including two goaltenders, nine defencemen, and 12 forwards will travel across Canada as part of the 16th annual series playing six games against CHL competition in preparation for the 2019 IIHF World Junior Championship taking place this season in Vancouver and Victoria, British Columbia.

This year’s Team Russia includes 20 players born in 1999 and three born in 2000 and features five players with NHL affiliations.  Among those players is goaltender Daniil Tarasov who was chosen by the Columbus Blue Jackets in the third round of the 2017 NHL Draft.  An additional four were 2018 picks including second rounder Alexander Romanov (Montreal Canadiens) and fifth rounder Daniil Zhuravlev (Colorado Avalanche) on defence, along with forwards Bulat Shafigullin (Los Angeles Kings) chosen in the third round, and Pavel Shen (Boston Bruins) selected in the seventh round.

An additional 10 Russian-born CHL players, all with NHL affiliations, will compete against their respective leagues headlined by Western Hockey League defenceman Alexander Alexeyev of the Red Deer Rebels who was chosen in the first round of the 2018 NHL Draft by the Washington Capitals.  He’ll play in both games against Team WHL beginning November 5 in Kamloops followed by Game 2 on November 6 in Vancouver.  Ontario Hockey League goaltender Ivan Prosvetov (Arizona Coyotes) of the Saginaw Spirit will suit up for his home country in Game 3 of the series November 8 in Sarnia along with forwards Alexey Lipanov (Tampa Bay Lightning) of the Kitchener Rangers and Alexey Toropchenko (St. Louis Blues) of the Guelph Storm.  Edmonton Oilers prospects Kirill Maksimov of the Niagara IceDogs and defenceman Dmitri Samorukov of the Storm will dress in Sarnia and in Game 4 set for Oshawa on November 12.  Four Quebec Major Junior Hockey League players will compete November 13 in Sherbrooke and November 15 in Drummondville including Ivan Chekhovich (San Jose Sharks) of the Baie-Comeau Drakkar, Alexander Khovanov (Minnesota Wild) of the Moncton Wildcats, Pavel Koltygin (Nashville Predators) of the Drummondville Voltigeurs), and Dmitry Zavgorodniy (Calgary Flames) of the Rimouski Oceanic.

Behind the bench for Team Russia is head coach Valery Bragin who is making his seventh series appearance and fifth straight.  His time with the Russian National Junior Team has led to five World Junior medals including 2011 gold in Buffalo, silver in Calgary (2012), Toronto (2015), and Finland (2016), along with bronze in Montreal (2017).