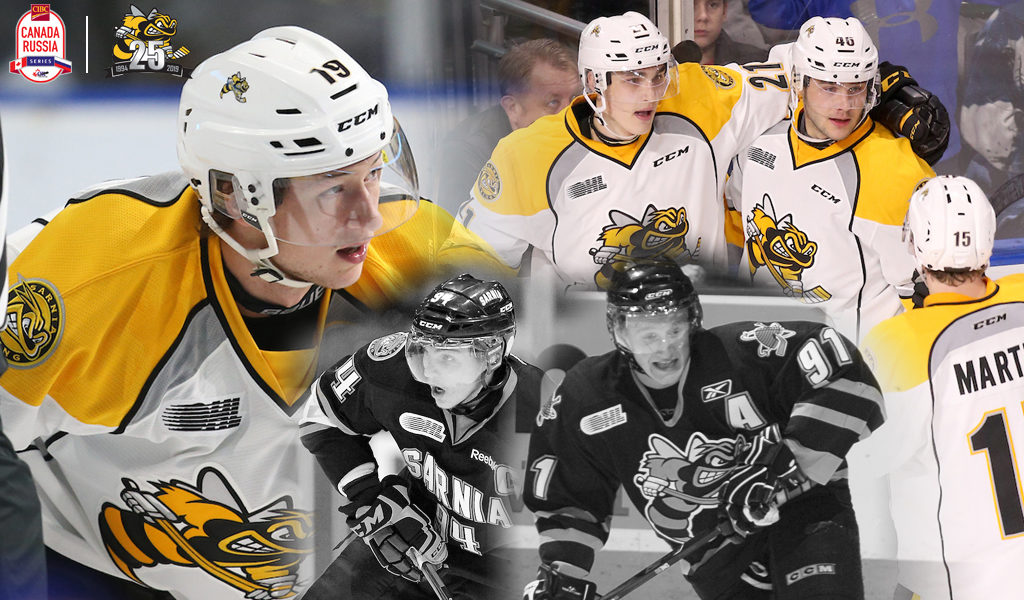 The Sarnia Sting have developed top tier NHL talent over the course of their 25-year history. Now a pair of long-time NHL competitors have banded together in an effort to bring the franchise its first championship.

Derian Hatcher and David Legwand purchased the Sting from long-time owners Rob and Larry Ciccarelli in January 2015 and made some additions to the franchise record books over the three seasons that followed. The Sting set a new franchise record with 42 wins in 2015-16 before besting that mark two years later, winning 46 games in 2017-18.

Quarter century salute 🐝@StingHockey have embarked on their 25th #OHL season by honouring the past and so far winning in the present.

Hatcher took the reins as head coach while Legwand finished up a 16-year NHL playing career before joining him on the bench as an associate.

“We are trying to build something and it doesn’t come overnight,” said Hatcher, a Stanley Cup champion with the Dallas Stars in 1999. “Last year we had a pretty good team in place and we fell short, but one of our goals is to be competitive every year so there really is no such thing as a rebuild.

“We want to put a capable team on the ice each season.”

A city of approximately 72,000 on the shores of Lake Huron, Sarnia has been the home of the Sting since 1994 when the Newmarket Royals moved west. They’ve been playing at Progressive Auto Sales arena since the start of the 1998-99 season.

Having played in a small market OHL city himself as a member of the North Bay Centennials from 1989-91, Hatcher knows first-hand the importance of players being a positive influence in the community.

“The parents are giving us their boys at a pretty young age and expecting a lot from us and we take that very seriously,” he said. “All of our guys are attending school whether that’s post secondary or high school and they’re involved in our community through school visits and other initiatives.

“We’re developing young men here and our guys know that we maintain a high standard when it comes to representing the Sting organization on and off the ice.”

Celebrating our 25th @OHLHockey season, fans can create the ultimate all-time Sarnia Sting lineup! kicking it off with the goalies!

Leadership starts with the captain, a role Toronto Maple Leafs prospect and Team OHL forward Ryan McGregor has embraced in the Imperial City.

“I really enjoy the smaller market here, the tight-knit hockey community that supports our team through the highs and lows,” said the Burlington native. “I’ve been able to make some good friendships during my four years here and I’ll always feel at home in Sarnia.”

Despite some big names and considerable regular season success, the Sting haven’t been able to get over the hump in the postseason. Last year a team starring OHL Player of the Year Jordan Kyrou fell in a five-game second round series to the Kitchener Rangers.

“Yeah, it was tough,” admitted McGregor. “We had a good group but things didn’t come together for us. We haven’t gotten off to as good of a start as we’d wanted this season, but we’re working hard to turn things around and I think there are bright days ahead.”

The Sting are off to a 7-8-2-0 start, stringing together a pair of winning streaks in the process. They’re led by McGregor, Swedish power winger Hugo Leufvenius, overage winger Anthony Salinitri and Calgary Flames prospect Adam Ruzicka down the middle.

There’s been plenty of off-ice fun as the club celebrates its 25th anniversary season, most notably in the form of a newly unveiled ‘All-Time Team’ vote that allows fans to have their say on the club’s best players by position.

While they salute the past, the Sting also have an eye on the future as Hatcher, Legwand and general manager Nick Sinclair look to build a consistent winner in the OHL’s West Division.

“If you look down the list we’ve had a lot of really good players come through here and the goal is to develop many more in the years to come,” concluded Hatcher. “That’s what we’re working at every day.”