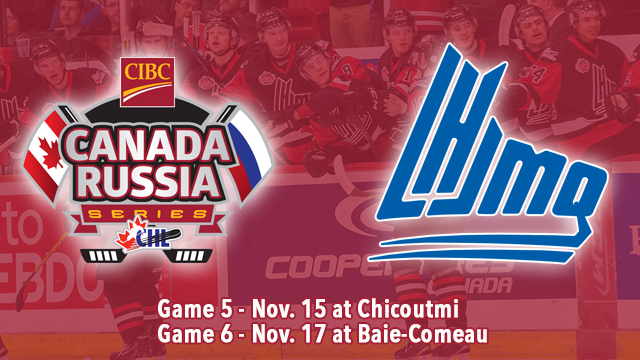 The Canadian Hockey League in association with the Quebec Major Junior Hockey League, the Chicoutimi Saguenéens and the Baie-Comeau Drakkar announced today the roster composition of the QMJHL all-star team to play Team Russia as part of the 2016 CIBC Canada Russia Series.

The Saguenéens will host the first game of the series to be held at the Georges-Vézina Centre, Tuesday, November 15, while the Drakkar host the second game to be presented at the Henry-Leonard Center on Thursday November 17.

Dominique Ducharme won a gold medal as an assistant coach of the National Men’s Summer Under-18 team at Canada’s 2013 Memorial Tournament of Ivan Hlinka. Ducharme joined the Voltigeurs after spending the last five seasons with the Halifax Mooseheads, who led the team to its first MasterCard Memorial Cup championship in 2013. Ducharme played seven seasons of professional hockey from 1995 to 2002 particularly in the ECHL, AHL and in Europe.

The three CHL leagues selected a committee who worked hard with Hockey Canada to select the players. A total of 21 players have been chosen. The starting roster for each games will be announced on a future date.

Here is the complete lineup for the 2016 CIBC Canada Russia Series of the CHL :

The 2016 CIBC Canada Russia series is supported by title sponsor and Official Bank of the CHL, CIBC, and CHL associate sponsors Cooper Tire, autoTRADER.ca and Sherwin-Williams.  All games will be broadcast nationally on Sportsnet and TVA Sports.

For event information including how to purchase tickets please visit www.chlcanadarussia.ca.