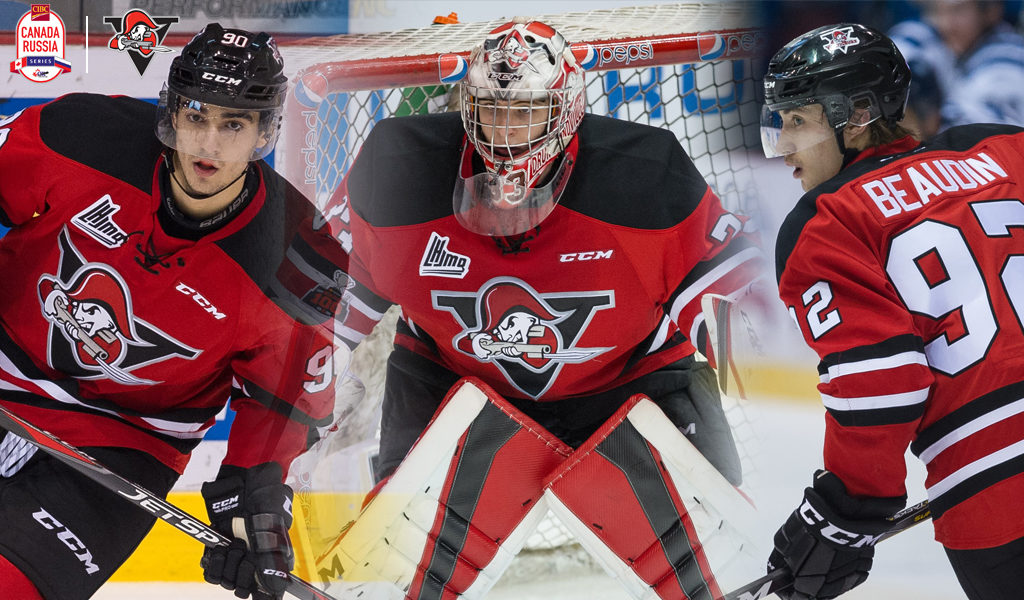 For the first time since 2014, the CHL enters Game 6 of the CIBC Canada Russia Series on the ropes.

Following back-to-back victories, Russia carries a 9-6 series lead in points into tonight’s contest in Drummondville as Team QMJHL is tasked with winning in regulation before facing a shootout for the second straight year, one they’d have to win to claim series supremacy.

The host Voltigeurs, the 10th ranked team in the CHL this week, will give the home fans plenty to cheer about with five player in the lineup as head coach Steve Hartley serves as a Team QMJHL assistant alongside Jim Hulton (Charlottetown Islanders) behind the bench.

Drummondville’s CHL record-tying fourth CIBC Canada Russia Series clash will also feature a Voltigeur suiting up for the opposition as Nashville Predators prospect Pavel Koltygin, who had two assists in Sherbrooke on Tuesday, will look to put Russia over the top for its first series win since 2014.

“We’ve get good crowds in Drummondville and it’s a great fan base,” said star blueliner Nicolas Beaudin. “You see them at the rink but also supporting us online too. It’s good to know you have all those people behind you.”

Beaudin’s roommate Joseph Veleno echoed those sentiments, sharing his enjoyment of the Drummondville community since being acquired by the Voltigeurs in December 2017.

“It’s a good little place for junior hockey,” he affirmed. “We’ve got a really good team this year that can do a lot of surprising things. I think the biggest thing is that we’re humble, we work hard and we look to get better every single day.”

“He’s been really good,” said Veleno of Hartley, who is the son of former NHL bench boss turned KHL head coach Bob Hartley. “Not a lot has changed in terms of our habits and systems since Dom (Ducharme) left, so all the guys are pretty used to it. Everyone has respect for him and he’s done a lot of good things with us, keeping us focused and disciplined.”

Joseph Veleno selected 30th overall by @DetroitRedWings in 2018 #NHLDraft secured two 1st round picks from #CHL’s @Voltigeurs_DRU for the first time since 1988.

Beaudin and Veleno shared a special moment this past summer in Dallas, being selected just a few slots away from each other by a pair of original six rivals in the first round of the 2018 NHL Draft. Beaudin went 27th overall to the Chicago Blackhawks while Veleno went 30th to the Detroit Red Wings, giving the Voltigeurs two first round picks in the same draft for the first time since 1988.

Tonight the two standouts look to lead the way to a QMJHL victory with what will need to be a much improved performance from Tuesday’s 5-1 loss in Sherbrooke.

“I think they were quicker than us the other night,” said Beaudin. “We gave them too much space. We made some adjustments at practice today and we just have to play quicker. You don’t have time to handle the puck for two or three seconds, you have to move it right away.

“If we can make those adjustments in Drummondville I think we’ll have a good chance to win.”

Catch tonight’s CIBC Canada Russia Series finale live on Sportsnet and TVA Sports when the puck drops at 7 ET/4 PT. The game can also be seen streaming live at CHLLIVE.com.