Comtois, Harvey rise to the challenge as QMJHL takes series in shootout finale 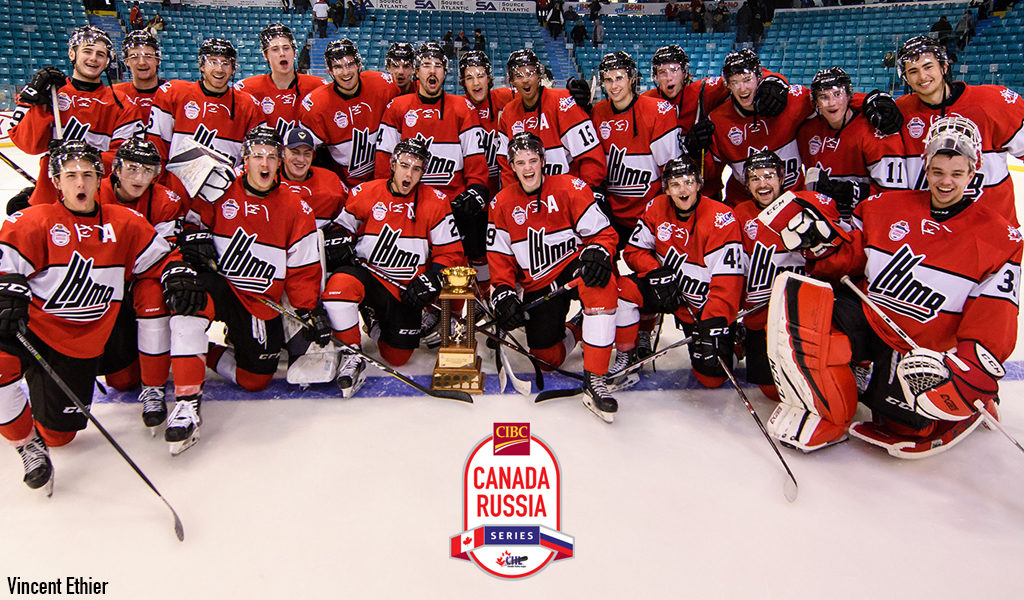 Moncton, NB – Now in its farewell season, the Moncton Coliseum has one more memory to include in its extensive 44-year history. One of the most exciting nights in the 15-year history of the CIBC Canada Russia Series saw Russia score late to win Game 6 by a score of 2-1 before Team QMJHL captured the series on a shootout winner from Anaheim Ducks prospect Maxime Comtois (Victoriaville Tigres).

The series would be settled in a shootout, one where Team QMJHL goaltender Samuel Harvey (Rouyn-Noranda Huskies) emerged as the hero. Harvey stopped all five shooters he faced, turning away Mikhail Maltsev to seal the deal and give the Canadian Hockey League its third straight series victory behind Comtois’ lone shootout marker.

“I gotta be honest, it’s my go-to move,” said Comtois with a smile. “I saw our two guys go first before me and watched the goalie all the way and found a weakness between the pads. I just kept it simple and it worked out.

“We knew when we lost the game in regulation we deserved the series,” Comtois added. “We played so hard, we played with structure and Harvey played two awesome games for us.”

Harvey’s 31 saves gave Team QMJHL a chance to win Game 6 and his five stops in the shootout paved the way to a series victory.

“We lost the game but we came back in the shootout and we’re very happy now,” he said. “Comtois came through with a huge goal and it’s just a great feeling to win this.”

Harvey was rewarded for his fine play in Tuesday’s Game 5, getting the call from head coach Dominique Ducharme (Drummondville Voltigeurs) once again.

For the first time in the series however, Russia would get on the board first as leading scorer Alexey Polodyan stretched his point streak to five games. The speedy winger orchestrated a give-and-go with linemate Andrey Altybarmakyan, wiring a shot over the shoulder of Harvey from the right circle at 8:16.

Late third period goal from @VitalyAbramov11 gives Russia a 2-1 win in Game 6 as the winner of the 2017 @CIBC #CANvsRUS Series will be determined by a shootout.

Team QMJHL managed to survive a late Russian power play to close out the first period as big saves from Harvey off Maxim Tsyplakov and German Rubtsov (Acadie-Bathurst Titan) kept the game tied at one.

The second period was all about the goaltenders as Harvey and Melnichuk went save-for-save to keep the score tied at one through 40 minutes with Russia outshooting Team QMJHL 18-17.

Harvey’s second period was highlighted by a pair of saves off defending QMJHL scoring champion Abramov, providing a big glove denial of the Columbus Blue Jackets prospect inside the final five minutes of the frame.

The hero of the night, Comtois elevated his play in the third period, serving as a catalyst for a pair of Shawn Boudrias (Gatineau Olympiques) scoring chances that were denied by Melnichuk.

Harvey managed to keep the game tied with a save off Artyom Manukyan alone in the slot with five minutes remaining, but Russia would prevail before time ran out as Rubtsov and Abramov capitalized on a 2-on-1 rush.

After Rubtsov blocked a shot at the defensive blue line, the two were off to the races as Abramov slipped a rebound under the pad of Harvey. The puck snuck over the goal line at 17:03, bringing a hush to the 6,253 in attendance at the Moncton Coliseum.

Shootout winner from @comtois20, five saves from Samuel Harvey give the @QMJHL a 1-0 shootout victory as the #CHL takes the 2017 @CIBC #CANvsRUS Series 10-9 in points.

Russia would ride out the remaining three minutes of regulation, outshooting the QMJHL 33-24 on the night to hold on for a big 2-1 victory and force a series determining shootout.

With Team QMJHL shooting first, Melnichuk and Harvey both turned away the first two opponents they faced before Comtois managed to snap a hard shot through the legs of the Russian goaltender. Harvey proceeded to stop Manukyan, Altybarmakyan and Maltsev to give the CHL a 10-9 series win in points.

“We had to play for the series in the shootout and we got it done,” said head coach Ducharme post game. “Overall, I think our guys deserved this.”

The CHL has now won the CIBC Canada Russia Series 12 times in the event’s 15-year history.